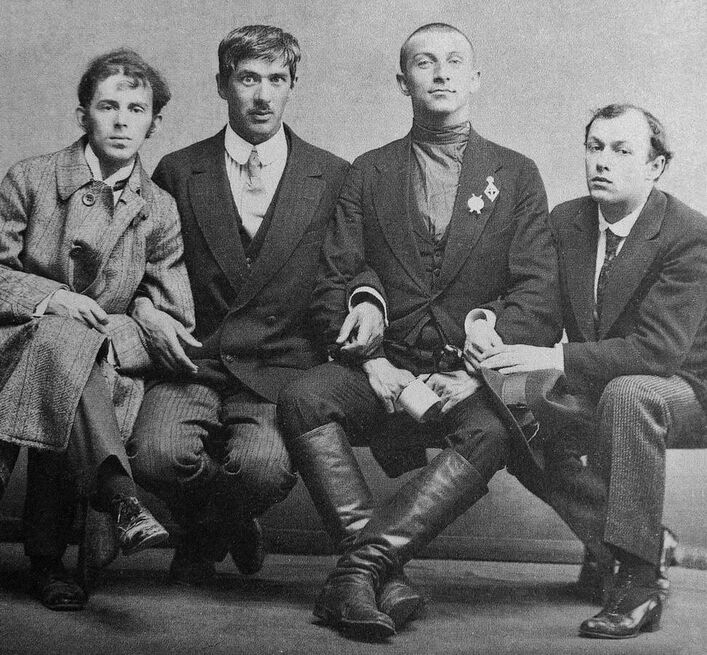 Unwilling to change his writing for the sake of the Socialist cause and therefore marginalized as a literary figure by the late 1920s, Mandelstam survived in the Soviet system as long as he did because of the influence and help of such important political and literary figures as Nikolai Bukharin and Boris Pasternak. By the winter of 1933, intentionally or not, Mandelstam was challenging the Soviet regime: in one poem he insinuated that Stalin was the “wolf” of Russian culture. The next year, Stalin sent Mandelstam into a three-year exile, eventually to the city of Voronezh, because of a poem in which the poet depicted the dictator’s body as that of “worms” and “cockroaches.” “One gets it in the groin,” Mandelstam wrote of Stalin’s victims, “the other in the forehead, one split between the eyes.” He recited the lines to only a few trusted friends; however, one turned informant and Mandelstam’s fate was sealed.

The deprivation and isolation he and his wife, the renowned memoirist, Nadezhda Mandelstam, experienced during their three years in Voronezh was severe. Toward the end of their term in 1937, they were facing starvation. Without the small and occasional support of money from Anna Akhmatova, Kornei Chukovsky, and Nadezhda Mandelstam’s family, they would not have endured. They were also approaching the height of Stalin’s purges, and they were aware that their fate was uncertain, their survival, questionable. Osip Mandelstam suffered from a heart condition that compounded his own hardship of deteriorating physical health. Still, he wrote intensely in this period, moving his lips as he walked in the winter fields, memorizing the verse he composed in his head, which Nadezhda often wrote down afterwards, as he was too weak. With the winter of 1937 progressing, she often found him unable to get out of bed, but saw his lips mouthing the verse she would then record on slips of paper. Her own memorization of the poems in the decades that followed, in large part, contributed to the poems’ survival.

Mandelstam referred to his poems written in the 1930s as “the new poetry” (commonly known as “the later poetry” in the West). The body of verse he wrote in Voronezh consist of three “notebooks.” The first was written from April to August 1935, the second from December 6, 1936 to the end of February 1937, and the third from the beginning of March to May 4, 1937. These poems, entirely written during his exile, in a period between destitution and hope, mark Mandelstam's crossing from modernist tradition to postmodern poetics and his negotiation of individuality and collectivity in the precarious political context of Stalin's 1930s. For many, they are considered Mandelstam’s crowning poetic achievement.

Mandelstam’s exilic poems investigate the deep relation between the poet’s mode of creation and the cycles of nature. Images of a nostalgic “world culture” are curiously mixed with coded political references and fused with the language of contemporary Soviet culture. This new poetry, dense with neologism and etymological play, is layered with references to the old culture (nineteenth-century literature, Dante, the painters of the Renaissance, classical civilization), while also intimating the crisis of the emerging Soviet regime, and obsessed with the poet’s own imagined “resurrection” in his verse. Due to now found and published NKVD and KGB files, we are able as translators to access and understand more profoundly the circumstances of the poet’s conditions and the interaction between his modes of writing, and thinking. The lack of availability of these recently available archival material and manuscript versions have led to translations and interpretations of Mandelstam in the English-speaking West that have been affected by ideological battles that continue to resonate in the wake of the Cold War. The time is ripe to reevaluate Mandelstam’s final poems.

As Gregory Freidin and other scholars have pointed out, Mandelstam’s idealism and courage in personally attacking Stalin in his poetry was not all of what it appeared to be. In fact, in time Mandelstam did all he could to save himself and, in particular, his wife, by writing letters and poems (including the infamous “Ode” to Stalin) in which he acquiesced to— and even celebrated, the Soviet order — and made efforts to redeem himself with Stalin. He wrote letters to the Soviet Writers Union, to editors and censors, pleading for renewal and redemption of his poetry. He deeply wanted that his poetry be published and accepted by the regime that condemned him; he never fully relinquished hope of returning to publication, but unlike Pasternak, he did not succeed in his attempt to navigate his poetry into “acceptable” Soviet culture. He spoke to no one about the torture he endured after his arrest, his betrayal of Akhmatova; however, he attempted suicide twice—once while in the infamous Lubianka Prison after writing the Stalin epigram, and then in Cherdyn before his relocation to Voronezh, where only Akhmatova would dare venture to visit him from Leningrad. He eventually came to see his own fate inextricably bound to what he called the “mounds of human skulls,” and with time he consoled himself in his poetry through the very associations that haunted and, eventually, destroyed him. He wrote the Voronezh Notebooks under the constant threat of his inevitable death, which finally came in a transit camp near Vladivostok on December 27, 1938.

In later years, Nadezhda Mandelstam made slight alterations to her husband’s poetry to create the illusion that he never yielded to Stalin. Her changes affected the image of Mandelstam in her own country and in the West and even led to translations that smoothed over the complexities of the poet’s conflicted attitudes toward the Soviet state. For example, in the case of the poem “If I’m taken captive by our enemies…,” it is important to know that there exist divergent perspectives of Mandelstam’s use of the verb in the final line—“будить” [to awaken] or “губить” [to destroy]—the choice of which greatly alters any resulting translation and the interpretation of the poem’s political motives. (Our translation reads: “... And on this earth that will evade decaying, / Stalin will wake both life and reason.”)  It is quite possible as well, however, that Mandelstam wrote two versions of the poem; one, as Nadezhda Mandelstam claims, would read: “…And on this earth that will evade decaying,/ Stalin will destroy both life and reason.” As a conflicted poet and supporter of the Revolution, he was torn between a sense of his own ‘guilt’ and exile, and his determination to allow poetry itself to be his guiding vision of the world. In a poem written two days before Mandelstam began his infamous “Ode” to Stalin, for instance, he wrote the following poem, dated January 16, 1937:


What can we do with the crushedness of the plains,
The drawn-out hunger of their awe?
For what we deem their vast expansiveness
Already we behold, revealed, as we fall asleep.
The question keeps coming up: where to, where from?
And is what’s crawling slowly over them
The one who makes us cry out in our dreams:
The Judas of nations to come?

Though Mandelstam was by no means a strictly political poet, to the contrary—his political stance was sometimes one of accommodation, and other times resistance, or even proud submission, reflected in the poetry’s contradictory shifts from poem to poem, stanza to stanza, line to line. Mandelstam’s critical layering of thematic and linguistic worlds goes beyond the Cold War view that emerged of the poet as a heroic individual resistant to the Soviet regime. Our translations attempt to reflect the orbiting political subtexts of the poetry, as well as Mandelstam’s deep identification with nature, with the “black earth” of the Voronezh region itself. Mandelstam’s work in these notebooks evolves over the period of exile as a radical transmutation of language and one that mirrors the poet’s paradoxical relationship to Soviet ideology and beliefs. He stretches the limits of accepted poetic forms, coins phrases, makes up neologisms, employs archaic diction in the midst of idiomatic speech, and does so in such a way as to produce a new poetic language. For a Russian intellectual of the early twentieth century, raised in a tradition of anti-egoism and self-sacrifice, his own personal adversity did not constitute sufficient grounds for rebellion against the regime. Mandelstam seeks a way to adapt to the contemporary society, negotiate his past sense of a self and personal legend, and—at the cost of his own life—finds a new poetics and a hermetic freedom. On February 8th, 1937 he wrote:

I sing when the throat is raw, the soul—arid,
Vision moist enough, and the mind guileless:
Is this wine good to drink? Are the bellows well?
Is the blood of Colchis beating strong?
My chest tightens—with no tongue, it’s silent:
No longer am I singing—it is my breath that sings.
Head hollow, and hearing sheathed in mountain scabbards...

The unselfish song is praise unto itself:
For friends a comfort, for enemies—hot tar.

A one-eyed song growing out of the moss—
The one-voiced talent of the hunter’s habit—
That’s sung in the sadd le and from the peaks,
Openly, freely, holding breath,
To deliver whole, honest, piercing, the song
Without sin to the wedding of the young.

The above poem (as well as two others included in the present selection), was written in the second Voronezh notebook, contemporaneous with Mandelstam’s work on his “Ode” to Stalin. The contrasts between their composition and thematic underpinnings reflect the inner turmoil of the poet in these bleakest days of their exile. According to Nadezhda Mandelstam’s memoir Hope Against Hope, he wrote the “Ode” while sitting at the kitchen table, attempting to become a true Soviet, working poet. He would rise and go to the table, though he did not usually write in this way, and there was little, if any, food. He could not work on the “Ode” with his normal process of walking and finding a language of the world around as he composed the lines in his head—with the voice of a “song growing out of the moss…” Often, however, words or whole phrases that he worked into the “Ode,” strangely appear as well in the poems of the second notebook with a completely different nuance and context: ones of  profound individual identification with the natural world around him and, as a reconciliatory gesture, or “holding breath” of a language akin with his own oppressed, exilic voice, and that of the mythic manifestation of the wandering Jew. He completed “Ruptures of round coves….” on February 4th, one day after finishing the first section of his “Ode” to Stalin; “I sing when the throat is raw, the soul—arid…” and “Eyes sharper than the whetted sickle…” were completed within the following week. Mandelstam’s paradoxical, and often outright contradictory expressions in the verse of the period derives from both despair and yet a strange semantic serenity—and struggle to go on:

“No longer am I singing—it is my breath that sings.”

- John High
Next
or
Return to Table of Contents