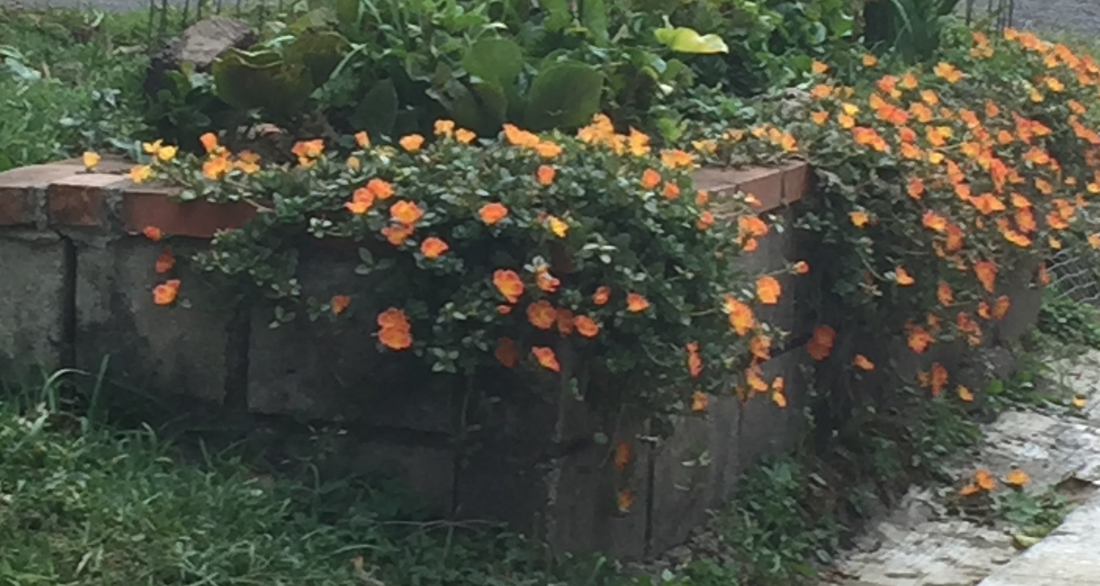 Bed of unnamed flowers in a neighbor's garden.
My neighbors—and there are several—love their flowers and are proud of their plants. Indeed, just this morning there was a tap on my door and upon opening, I weas greeted by one who gifted me some cuttings from a flowering plant that specifically attracts the endangered Monarch butterfly, as well as several odd black seeds which seem to be surrounded by a silky white fur.  Of the latter, I am assured that it will grow into a small tree with curved, bird's-beak-like flowers that are "fantastico!"

​Now, for the past nearly nine years, according to the official bio I append to various writings, I have been living below the radar in “a mountain village, far, far away.”  Where?  in Latin America which, here, has but two seasons, dry and wet, and where the length of the day varies from more northerly climes by only about an hour, depending upon whether it is winter or summer.  Having to move from one "mountain village" of about 500 souls at a most inconvenient time—in the midst of  a pandemic--I left that village for a slightly larger one, population about 5000, and a good 1000 feet further down the mountainside.  From an altitude of 6,300 feet to a mere 5,200.  What I also sadly left behind, in a more rural setting, was garden space.

The new landlord, muy amable, offered space just a little up the hill, either in a field cluttered with rubble or one adjacent to his parents’ place. When he showed the space to me, I noticed it was just downwind from—and far too close to—the coffee fields. Sadly, 99% of the coffee raised here is raised with the aid of chemical fertilizers and pesticides, including the demon Bayer Co.’s* neonicotinoids, which kill bees—already, worldwide, down by 50%.  Also know that Monarch butterflies are in danger of extinction as well, due to habitat loss and pesticides:

So much for that space.  However, since I do not own a car here, but use public transport, there was the cochera, or carport adjoining my house—1/3 gravel, 1/3 tile, and a 1/3 concrete slightly inclined space for a vehicle to ascend. To make a long story short, I fenced off the graveled part, put up a raised bed and have massively invested in containers. And plants, of course.

Here the common vegetables like corn, tomatoes, cabbage, etc., or fruits like bananas, papaya, grapes and so on are easily identified.  However, the average person has no idea what the common names are, let alone the scientific ones, for many of the flowers. Even the viveros, or garden centers are clueless. To ask if the growers have such and such a plant, one takes a photo with one's phone and shows it to them. Google Images is a lousy source. The above, for example, was identified as a rose by google; and, while it still remains nameless, I am not such an idiot that I don't know a succulent when I see one.  And, I might add, thanks to Google I killed a sweet little mauve flowering plant, as it required the opposite care than that specified by Google’s misidentification.

But hope, as Emily Dickinson once said, is “that thing with feathers that sits on the soul.” So I continue to eschew quick fix gardening, walk around the neighborhood, taking pictures of flowers that intrigue me, relishing their beauty, identifying what I can and wishing for my favorites to turn up at my local vivero.  Some of those photos follow.
— Photos and text by Bronwyn Mills
*​ One third  of all the food we eat comes from plants pollinated by bees and other pollinating insects.  Once an innocent manufacturer of aspirin, Bayer has recently added to its own manufacture of neonicotinoids by buying out Montsanto, producer of the infamous RoundUp, plus other nasty chemicals, all also harmful to pollinators, birds, and human beings.  99% of all coffee is raised with artificial fertilizers, pesticides, and neonicotinoids.  50% of all bees are gone; and 1300 bird species face extinction from pesticides & climate change.
Next
Powered by