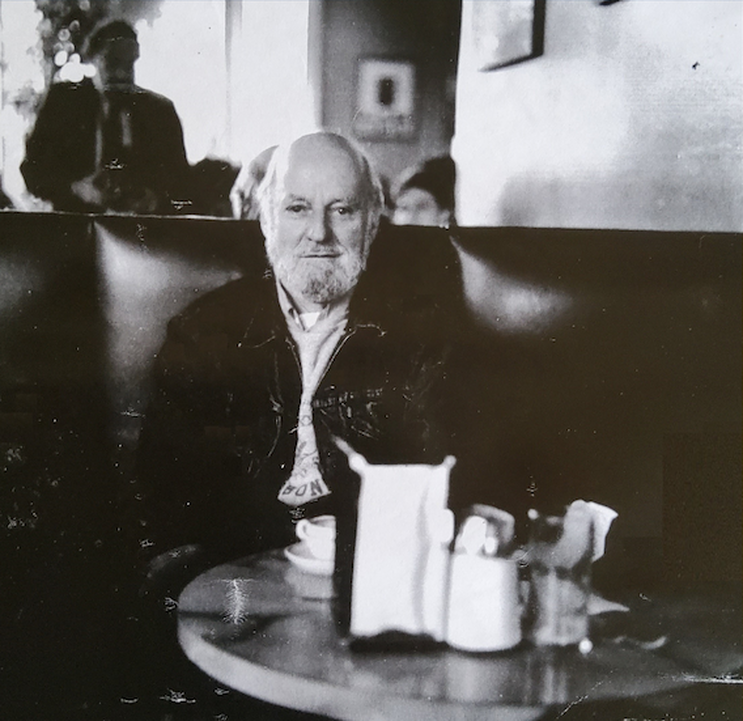 All my life I was that person who couldn’t start a book until I’d finished the one I was reading. Then, about five years ago, I began reading multiple books at the same time. So now, I wake up, run through the pile of paperbacks next to me or the list on my e-reader, and decide which I feel like reading. Sometimes I choose as a writer, for inspiration or to sharpen my desire to write or to see how others draw their portraits and associations; or I make the choice as a overstimulated person who simply wants to be distracted from their own life; or I just want to check out a book recently mentioned by a friend or in a review. So I pick up a book, read a chapter, grab another book, read a bit, pick another, like an addict. I want to consume them all, have all those books, all those words inside me. Some I finish, some never. Or never yet.

This isn’t binge watching, it’s seeing shows as they naturally occur, once a week. Or maybe it’s more like sampling. I hear rap lyrics that include phrases from old school songs. “Diamond in the back, sunroof top, diggin' the scene with a gangsta lean.” Kids think this is Ludicris while I hear a sample of Curtis Mayfield. So on any day, as I sample different books, I jump into a conversation rich with language and voices that span centuries and continents.

Recent books I’ve finished: How to Write an Autobiographical Novel by Alexaneder Chee, A Discerning Eye by Carol Orange, Shuggie Bain by Douglas Stuart, The Stranger by Albert Camus, Real Life by Brandon Taylor, Mrs. Dalloway by Virginia Woolf, Writers and Lovers by Lily King, and Lying Life of Adults by Elena Ferrante. Eclectic and without direction, I grab and go.

Only seventy pages into Happiness by Aminatta Forna, I’m enthralled, especially with her way of seeing her characters who see others and then see others seeing them. The section before chapter one is from the point of view of a wolfer, who hunts and kills wolves for a living in 1834. Chapter one begins in 2014 with accidental paths crossing. One is a red fox; another is Jean Turane, an American in London, studying urban foxes, so she spends her time watching them, seeing their corpses, most killed by speeding vehicles; and three is Dr. Attila Asare, a well-known Ghanaian psychiatrist who specializes in PTSD treatments for people from war-torn countries. Of his wife, he thinks, “You would never have guessed by looking at Maryse that she was a very good mimic, and afterwards over dinner she mimicked, though not unkindly, one or two of the guests. Her talent lay, not in ability to fake accents or pull faces, but the way she had of conveying the particular traits she had identified in a person: the jaded, uxorious, ebullient, world-weary, gluttonous or irascible.” So far, this seems also to be a talent of the writer Aminatta Forna. As she shifts between the details of natural beauty and love to the horrors of killing and despair, I see it’s a big book with big themes. I will finish this one.

Look Homeward, Angel by Thomas Wolfe, first published in 1929, is a novel, beloved by my father and many of his generation. I tried reading it again about ten years ago and found it so dense and repetitive it was nearly unreadable. I picked it up last week and was enchanted. Starting with the introduction: “If any reader, therefore, should say that the book is "autobiographical" the writer has no answer for him: it seems to him that all serious work in fiction is autobiographical--that, for instance, a more autobiographical work than "Gulliver's Travels" cannot easily be imagined.” This resonated with Chee’s book I’d recently finished. Then Wolfe’s book moves to his oft-quoted: “. . . a stone, a leaf, an unfound door; a stone, a leaf, a door. And of all the forgotten faces.  . . . O lost, and by the wind grieved, ghost, come back again.” Wolfe rhapsodizes about the father and his larger than life appetites for words and drink. Then Eugene Gant appears and even as a toddler, speaks with a writer’s voice. “He [baby Eugene] was in agony because he was poverty-stricken in symbols: his mind was caught in a net because he had no words to work with. He had not even names for the objects around him: he probably defined them for himself by some jargon, reinforced by some mangling of the speech that roared about him, to which he listened intently day after day, realizing that his first escape must come through language. He indicated as quickly as he could his ravenous hunger for pictures and print: sometimes they brought him great books profusely illustrated, and he bribed them desperately by cooing, shrieking with delight, making extravagant faces, and doing all the other things they understood in him. He wondered savagely how they would feel if they knew what he really thought: at other times he had to laugh at them and at their whole preposterous comedy of errors.”

You can get the complete works of Thomas Wolfe in e-book form for a mere 99 cents. No page numbers only locations, 77,447. I’m on 1,167. Though he’s not read much anymore, there is still a Thomas Wolfe Society and in 2000, O Lost: A Story of the Buried Life was published, reconstructed from Wolfe’s original, much longer manuscript of Look Homeward, Angel. O Lost rings in at 694 pages, a gain of 150 pages, though supposedly this would be more if the new version had been printed in font size of the first.

For Steve Wishnia’s A-String to Your Heart Music: Writings 2001-2017, I’m on page 78 of a 173 page book of essays. A novelist and journalist who writes about labor and housing issues, Wishnia played bass with the False Prophets in the 1980s, when I first met him. Through his social and political lens, he zooms in on various styles from rock, punk, tango, and African. This book is chock full of great historical tidbits, like the origins of distortion and Link Wray’s first “‘intentional’ use of distortion on a record.” (In the 80s, my biggest success as a guitar player came when the tubes in my amp, unbeknownst to me, were blowing up. Friends crowded around as I got off the “stage” of A7, to ask a totally bewildered me, how did you get that sound?) I have a signed copy of Wishnia’s book published by The Imaginary Press. When I searched for it online, it didn’t appear anywhere. Wishnia’s other books pop up, but not this one. What does that mean? I hold the book in my hand—does it exist? Imaginary, indeed. More distortion.

Now, just a quick sentence or two about a few recently finished books.

How to Write an Autobiographical Novel by Alexander Chee. After Chee’s first book Edinburgh, was published, he was frequently asked if he, like his character had suffered sexual abuse. To answer, he began to write essays. Not only are these compelling essays on writing, but he took me on a trip through the decades to San Francisco during the AIDS epidemic, as he discovered demonstrations and police brutality, the beginnings of ACT UP, and lived through so many sick friends and so many memorials. In “Girl,” he writes about his first time in drag, make-up, high heels, and wigs. “Sometimes you don’t know who you are until you put on a mask.”

A Discerning Eye by Carol Orange, a fictional account of a true event, the theft of thirteen works of art from Boston’s Isabella Stewart Gardner Museum. Portia Malatesta, an art gallery owner, works up a psychological portrait of the thieves by looking at the paintings they stole, is enlisted by FBI, and goes to Medellin to catch the thieves. Her relationships with her own family and the families of the thieves and the art works makes this an unusual framework for a mystery book. Carol Orange knows these worlds, as she was an art dealer in Boston. And she, too, is a friend from a writing workshop of some years ago.

Shuggie Bain by Douglas Stuart, winner of the Booker Prize and finalist for the National Book Award, looks at growing up with an alcoholic mother in Glascow in the 1980s. His dialogue, loaded with lively slang, helps to relieve the unrelenting suffering of this autobiographical novel. For only a few blessed months, Shuggie’s mother Agnes gets sober and has a job. At a meeting she hears a man speak, “’Still, at the end, it was true, eh? I am in flames, yet I do not burn.’ He wiped the spit from the corners of his mouth. ‘That’s what Saint Agnes had to teach us. How even in the darkness there is still hope.’ Agnes blinked blindly around the smoky room. . . . The speaker had tried his best to inspire.. . . . The woman leaned forward to whisper into her ear. . . . ‘Aye, right enough. The bastards couldnae burn Saint Agnes, so they beheaded the poor lassie instead. Fuckin’ men! Eh?’”

By chance, as I finished reading The Stranger by Albert Camus, I started Real Life by Brandon Taylor and they oscillated together. In Taylor's novel, Wallace, whose father has recently died, is living a similar anxiety, alienation, and streak of rage as Camus’ Meursault, whose mother has died. As those two books echoed each other, they made me consider my feelings about the loss of my mother and father. Both will connect with anyone who is grieving the loss of a parent, even if, or maybe especially if, they are grieving the loss of a chance to confront mom or dad. O lost, and by the wind grieved,

Then the seductive stack of dance books calls to me. Jerome Robbins, by Himself: Selections from His Letters, Journals, Drawings, Photographs, and an Unfinished Memoir by Jerome Robbins, edited by Amanda Vaill; Glory: A Life Among Legends; A Memoir by Dr. Glory Van Scott; Dance We Do, A Poet Explores Black Dance by Ntozake Shange; Sonidos Negros On the Blackness of Flamenco by K. Meira Goldberg; Tango, the Art History of Love by Robert Farris Thompson; Ballerina, A biography of Violette Verdy by Victoria Huckenpahler; and Dancing Many Drums, Excavations in African American Dance edited by Thomas F. DeFrantz.

Plus, I have my lengthy list of books-to-read suggested by friends or reviews. Plus, scattered about our apartment are stacks of literary and news magazines. Plus, my lists of Netflix, Hulu, and HBOMax series and movies I need to watch. Help. Stop. I’m going to explode— though I have a bit of joy thinking this might have added to your lists, causing your anxiety about reading everything in sight to increase as mine has. Hah! “ghost, come back again.”
- Christopher Sawyer-Lauçanno
We include a reading of Ferlinghetti's work, A Tribute to Lawrence Ferlinghetti, on what would have been his 103rd birthday (originally on Zoom). Links to the actual poems can be downloaded  as a pdf:
Return to Table of Contents  ​
Powered by