​I should say it from the start: I was born and raised in Connecticut and I have family from Massachusetts to the Maine border. I may be Italian-American, but I know all about Yankee thrift as a cardinal virtue.  In elementary school, I sang “The Landing of the Pilgrims,” to Mrs. Lambert’s pounding piano: 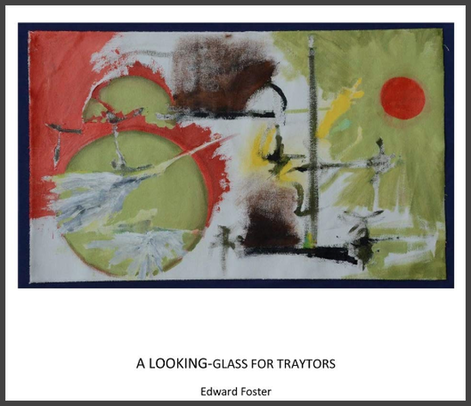 So it’s no surprise that Edward Foster’s new collection, A Looking Glass for Traytors, warmed me like hot cider in a drafty old Colonial manse. Of course, to be warmed in New England is to feel a heady mix of grief, loneliness, and more than a touch of rancor; to pull on austerity like a well-worn flannel slipper. But it is also to bask in the freedom to be authentic, or more precisely, eccentric.

Foster’s book takes its name from an English tract of the same name from 1678, which chronicled “the manner of the tryall of those barbarous wretches at Justice-Hall in the Old-Baily, who contrived and compassed the death of his late Sacred Majesty King Charles the First, of ever blessed memory: with an account of their severall arguments, conviction, condemnation and execution.” Three of the barbarous wretches, William Goffe, Edward Whalley, and John Dixwell, escaped to the American colonies, to lay low and, when safe, call out the monarchy. Goffe, Whalley, and Dixwell all lived in New Haven, Connecticut for a while (where all three have streets named for them, Dixwell Avenue being a source of giggles to this day). Goffe and Whaley later lived in hiding near Hadley, MA, the area of Western Massachusetts where Foster grew up.

The first five poems in A Looking Glass for Traytors have a pure New England sensibility: spare, economical lyrics in which nothing is wasted. Two of my favorite poems in the book, “Hermes” and “Basic Truth,” have a somber beauty that chimes with the cold months (that is, half the year) in the Northeastern USA. We experience in the poems those unrelenting “maple leaves and darkened skies” and those quiet, frozen hours when life’s lessons emerge from solitude:
Then winter’s dreary day
Convinces you that silence
Is the simple message
Teaching can deny.
​
Solitude, for Foster, is a difficult, life-long friend—a true New England friend, quarrelsome but unshakable. Solitude is with us always, as the poem “Repetition” makes clear, with its image of walking alone in the forest “no different from what I used to know.” Though quite different, the poem carries an echo of Robert Frost’s “Stopping By a Woods on a Snowy Evening,”  another poem set in New England, in which the melancholy pleasure of solitude tempts both poet and reader. Solitude entices us with conflicting promises of safety, privacy, decadence, and fear. This is expressed in Foster’s poem “Wonder,” in which the comfort of solitude can too easily be broken by difficult emotions. There is shame at our sinfulness. There is terror when, alone, we experience the force of nature, when “the trees collide/In violence.”

Nature, in Foster’s book, is overwhelmingly harsh. Winter weather is an image in many of the poems—13 to be exact. Wind, snow, and cold, repeating day after day, are phenomena known to all New Englanders. But winter is also Foster’s broad metaphor for a mind compelled to turn inward and to reckon with stormy emotions or stinging memories, which ultimately results in freedom. This is the freedom that the paradigmatic New Englander, Henry Thoreau, found at Walden Pond: “to pass an invisible boundary” and to “live with the license of a higher order of beings.” Foster captures this in the last lines of a prose and poetry essay, reminiscent of Japanese haibun, that ends the book:
Suffering and the past no longer invade the soul, and nothing is left,
for the moment, but freedom “in the tearing wind”:

Winter blue and white,
An arctic cold,
Implicit.
Burrowed within
An inner sunset
Fraught with cold

Cold within.
Wind, not you,
Makes itself,
Not arctic cold
Merely felt

And
Everything is
Set to rights
Again

Foster is at his best when crafting brief lyrics. His terse language and short lines lend themselves to compact poetry, much in the way Charles Simic’s lines favor shorter poems. Foster also shares a technique with Simic, capitalizing the first letter of every line, that establishes a strong cadence most felicitous in short poems. In Foster’s long poems, however, the brevity of the lines and the cadence forced by initial capitalization can sometimes become overly insistent. In some cases, Foster divides his longer poems into discrete sections by a subtitle or a letter of the alphabet; this stylistic method is a wise choice, allowing Foster’s long poems to share the power and grace of his short poems.

The collection might also benefit from paying off the concept of “traytor” in a more obvious, accessible way. The traitors who inspired Foster betrayed a “monarchy and illegitimate control of all kinds,” but they were loyalists to liberty. To anchor the book in these concepts, the poems might have been grouped under clearly-worded section headings or section-leading quotations, rather than single, opaque section heading (“And Then the Troubles Struck/Verticals and Repetitions”) and the photographs the book uses to make divisions.

A Looking Glass for Traytors is a collection of poetry with a distinct spirit of place. The book has a New England accent, but the truths it speaks are universal. Freedom of mind develops through emotion, not in rational opposition to it. To be taciturn is not to reject feeling, but to respect the power of feeling and the frailty of reason. And all of this requires solitude—the sometimes punishing but always necessary teacher, that bids us to:

For a recent interview of Foster on the subject of this new book, see Emanations of Pan.

In addition to being a remarkable poet, Foster is the founding editor of Talisman: A Journal of Contemporary Poetry and Poetics, Talisman House, Publishers an imprint of Jensen/Daniels, Publishers., Publications include the forthcoming translation by Cliff and Selhan Endres, of  Turkish poet, Enis Batur (Witty Partition published some ot those translationons in Issue #13), Romanian teller of tales, Panaït Istrati's, Kyra Kyralina (trans Chris Sawyer-Lauçanno), Istanbul: Metamorphoses in an Imperial City, ed. M. Akif Kirecci and Edward Foster, Murat Nemet-Nejat's  EDA :An Anthology of Contemporary Turkish Poetry.  Small Press Distrbution holds some of his older titles.

Next
OR
Return to Table of Contents  ​
Powered by